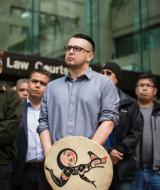 Ken was born and raised in Port Alberni in Tseshaht First Nation territory and has lived most of his life in the community. He is the eldest son of the late George Watts and his mother is Matilda Atleo (now married to Cliff Atleo). He has three beautiful children Tristan, Noelani and Kailand.

Upon returning home Ken was employed with West Coast Aquatic and then moved on to Operations Manager for the Tseshaht First Nation. Elected as Vice-President of the Nuu-chah-nulth Tribal Council (NTC) in 2012, Ken went on to serve the fourteen member First Nations for five years.

waamiiš was elected as a Council member serving a three year term (2017-2020) and then re-elected to a four year term in December of 2020. Tseshaht Council appointed Ken as the Elected Chief Councillor and he is looking forward to serving the Tseshaht First Nation.