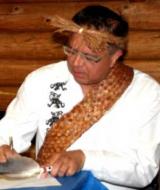 The son of Pauline and Tinus Braker and the grandson of the late Hughie and Grace Watts of Tseshaht, Hugh has two brothers; Cliff and Colin Braker.

He graduated from Alberni Dist. Sec. School and continued his education at the University of BC in the Honors International Relations Programme.   After later graduating from the UBC Faculty of Law, he became a lawyer in 1984 and practiced for 23 years specializing in Aboriginal rights litigation.  During that time he also worked for one year for the Assembly of First Nations in Ottawa as the Director of the Self-Government programme and was in house counsel for the Nuu-Chah-Nulth Tribal Council until the late 1990’s.  He has appeared in all levels of court in BC and many times in the Supreme Court of Canada.  He  was counsel on some of the most important aboriginal rights cases in BC, including; Haidav. Canada, R. v. NTC Smokehouse, R. v Dick, R. v. Jack, R .v. Douglas, Taku v. BC, Campbell v. Nisg’a Nation and many others.  He has written and delivered 75-100 papers in his career (many published), was appointed Queen’s Counsel (Q.C.) in 2000 and received the National Aboriginal Achievement Award in Law and Politics in 2007.  He has delivered papers in Brisbane, Australia; Tasmania, Australia; Seattle, USA; Auckland, New Zealand; through-out Canada and many other places.  He has served on many aboriginal boards of Directors and has been president of the Native Courtworker and Counseling Association of B.C. for 24 years.  He currently sits on the New Relationship Trust Board of Directors and the Justice Institute of B.C. Aboriginal Advisory Council.

Hugh has high hopes for the Tseshaht people.  He envisions a community that is an economically and culturally thriving community with an increased educational attainment level.  He dreams of a community that is healthy, stable and secure for its members.  “As a Council we have to ensure that during our term of office that there is accountability, good communication, budget and debt control, sound governance, sound planning and responsible use of resources.  All this has to be done in accordance with Tseshaht culture, beliefs and values.  That has to be our goal as a council.”