Sayachapis – “Stands up High Over All” 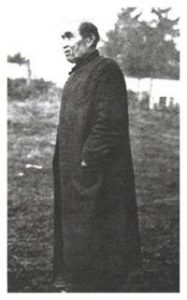 Sayachapis lived his early life in a longhouse at Hiikwis. Throughout his life he was “as instinctively familiar with the run of the water, and the dip and lurch of a canoe, and the turn of a paddle, as with the movements of walking on land”.

Sayachapis received constant instruction from his father and maternal uncle on spirituality, respect, and proper protocol. He learned that “If he wished to be a successful hunter, he had to retire at certain seasons to secret places in the woods known only to the respective families that frequented them. Here, for days on end, he would bathe, rub himself down with hemlock branches until the skin tingled with pain, pray to the Sky Chief for a long life and success, and most important of all, carry out secret and spiritual performances based on the principal of initiation.” This was the practice of .

Tseshaht and Nuu chah nulth custom required an individual to change names as they moved through different phases of life. Sayachapis held different names throughout his life. Childhood “nicknames” were informal and descriptive and are often not remembered. The earliest name Sayachapis remembered was t’inicawa, “getting whale skin”. His father gave him this name when the young boy would run to the beach to get pieces of whale skin. When he became a man the right to use this name was passed to his eldest son and also went with his youngest sister as part of her dowry when she married.

As soon as his daughter was born, he began planning and collecting gifts for her ehts-too-thla, her puberty potlatch. He had planned to build a new house to host this feast however two incidents stopped this. For one, he found that the “appropriate timbers for posts and beams were not easy to find” due to the early logging practices of the white man. For another, his daughter became a woman before he could complete the house. He received the name Sayachapis at his daughter’s ehts-too-thla.

Sayachapis was a prolific whaler and speared many whales for his hawiih. His knowledge was such that he could bring in a whale a day, sometimes two a day. Sayachapis also held the hereditary right to hunt seals, otters, and sea lions as well as whales. He credited his success and longevity in hunting to his spiritual practices and his respect for protocol.

Sayachapis also worked in the forest harvesting timber. He became a skillful woodworker, filling demands for many different items. He built boxes with telescoping lids, paddles, bailers, fish clubbers, adze handles, ladles, bows, arrow shafts, fire drills, latrines, root diggers, fish spears, shafts for sealing and whaling harpoons, and he also assisted with canoes and the placing of longhouse posts. He harvested cedar planks of various lengths and widths and often canoed from village to village selling these planks. Sayachapis was able to amass great wealth for himself through trading. He traded for items such as blankets, dentalium, dried fish, and whale oil. Due to this great wealth he was able to host potlatches.

When Sayachapis was a young man the face of the potlatch was changing. The potlatch was a complex system that taught and reinforced teachings in multiple areas: governance, laws, law enforcement, history, kinship and economy to name a few. This ceremony reinforced identity and pride and strengthened the people. Early in Tseshaht history only hawiih, hereditary chiefs, hosted a potlatch. They hosted potlatches because they were the only ones with wealth. They hosted on behalf of their community as the name of the community was only as great as its hawiih. As the mamalthnii, (non-native), system of wage labour was introduced, wealth became available to , commoners, who worked at these jobs. These wages allowed to obtain the wealth necessary to host a potlatch. Sayachapis earned a good wage for himself and was very well known for the lavish potlatches he hosted. He gained such status through this process that he “put his family high” and received a seat with the chiefs”. He was not a chief but had a high status and sat with the chiefs.

Our c̓išaaʔatḥ dialect is one of the nuučaanuł (Southern Wakishan) languages spoken on the West Coast of Vancouver Island. Over thousands of years our ancestors developed a strong and beautiful language to describe their environment and way of life and belief system. We are proud to share this with you as you begin your journey into understanding our culture.

For more information about our language, please visit:
http://www.firstvoices.com/en/cisaaath

We Nuu-chah-nulth peoples have been aware for a long time that our languages were being replaced by English. This dictionary is the culmination of the first phase of the NTC’s commitment to the goal of maintenance of our language.

The link above is a copy of this book.