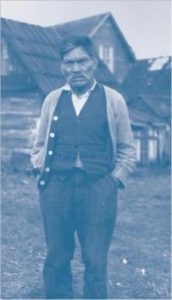 When he was alive Captain Bill had the head position of the Maktl7ii7ath, a position now inherited by his grandson Albert Clutesi. Between 1910 and 1914, Captain Bill was one of Edward Sapir’s principal informants on Tseshaht history, and in 1911 gave a Tlookwaana, which Sapir documented.   Captain Bill provided information on many Tseshaht tutuupata, including:

Captain Bill was the owner of the Thunderbird mask representing one of his own tupaati. Not just the mask itself, but the names, songs, and dances that were associated with it were his property. These prerogatives contributed to and reflected his position in Tseshaht society and ceremonial life.