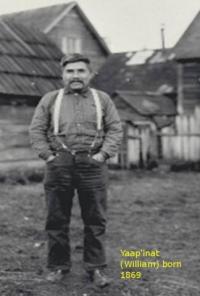 From the Tseshaht and the father of Frank Williams, William provided some key historical Tseshaht accounts such as ;

William’s name Yaap’inat was from his father’s uncle who was a Tseshaht living at Ts’ishaa.

William carved many significant cultural artifacts now held by the Canadian Museum of Civilization such as four model house posts and ritual seal clubs. He told many spiritual mountain stories on spiritual objects which can give power for various purposes.  Provided some key in depth accounts of seating at feasts and provide key accounts of Tseshaht amalgamations such as Maqtliaht.  William also provided valuable song data such as lullaby and tamaa (social) songs. He provided whalers accounts.  William’s wife held a high place among the Huupach’as?ath.