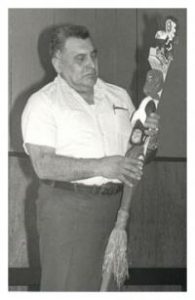 Adam was a traditionally trained hawiih. He lived a life dedicated to serving and caring for his community.

Adam was born in Dutch Harbour, next to hiik’is, on April 18, 1920. He was the oldest son to Jacob Shewish of Tseshaht and Eva Hayes of Ditidaht.

Jacob’s older brother was Watty Shewish, naawahat, “waited for”. At the time of Adam’s birth, Watty was hawiih, the Tseshaht hereditary chief. Watty had no children and passed his chieftainship on to his younger brother Jacob. Jacob, in turn, passed this title on to his oldest son, Adam.

When Adam was young he was surrounded by the Tseshaht dialect, teachings, and territory. Everything he heard, every song that was sung, every prayer, and all his teachings were in the Tseshaht dialect. People cared about each other and shared what they had in good times and bad. His family followed the seasonal rounds in their traditional territories in what today is known as the Broken Group Islands. The Shewish family taught young Adam about the role of a hawiih; they taught him how important serving his people was. He learned about Tseshaht traditional territories, values, beliefs, and lifestyle. He learned the history of Tseshaht including the Tseshaht creation story which took place at Tseshaa, now Benson Island. All his life Adam loved the Broken Group Islands and his biggest dream was that the Tseshaht would regain control of their birthplace.

Adam married Margaret, originally Margaret Jackson of Neah Bay, on May 21, 1945. Margaret was 18 years his senior having been born on February 14, 1902. Adam and Margaret had one child, Edward. Margaret had 4 children, Gerry, Doreen, Barbara, and Clive, from a previous marriage to Alfred Fred. Margaret and Adam also cared for numerous foster children.

Adam’s house was open to visitors of all races and walks of life. He was always willing to share a smile, joke, story, and a cup of tea. He invariably answered the phone with “Boy you’re looking good today!” accompanied by a chuckle. In the early 1970s he befriended a young archaeology student doing an excavation in Tseshaht traditional territory. Denis St. Claire worked in Tseshaht territory and interviewed local elders to collect the early history of both Port Alberni and the Broken Group Islands. Today, Denis returns that early friendship by sharing the knowledge he gained from elders with the Tseshaht people.

Adam was a big supporter of education and of the Haahuupayak Elementary School located on the Tseshaht reserve. He generously gave the school permission to use his songs and dances. He asked Ron Hamilton to design the logo for the school, a child with big ears. This logo symbolized both the need to listen and the school as a place to listen, to learn. Adam visited the school almost daily and never missed a meeting, concert, or sports day involving the school.

Although Adam worked at Alberni Plywood Division since he was 16 years old, he was only 12 when he worked to help with its construction. He took early retirement after 44 years of work, when his wife had a stroke and was partially paralyzed. For the next 5 years Adam sat with her and comforted and fed her. He spent the year after her death preparing for and hosting a Taakt’uuta, a memorial potlatch, for his wife Margaret, his Aunt Mabel Taylor, and his grandson, Norman Smith Jr.

Adam passed from a heart attack on December 30, 1990. A newly constructed band building, which housed Haahuupayak School, was named the Shewish House of Learning in his honor.