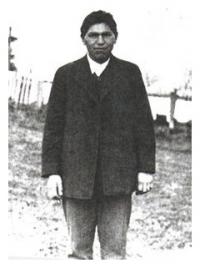 “Alec held one of the last traditional potlatches. It was at athlmaqtleis, Dodd Island and lasted several days. This was probably at the time he worked for Sapir…..He documented potlatches. His work was better documented than a lot of anthropologists.” – Wilfred Robinson

Alec was a fisherman, trapper, longshoreman, logger, “anthropologist”, interpreter, and native politician in a time of great change for his people. He was born around 1894. Alec had a trap line that ran 14 miles from the Somass River up to Sproat Lake. He walked the distance to check his traps, at times bringing his wife Eva, and son Bob. Alec also was a holder of songs for the Tseshaht people. Doug Robinson remembers that whenever people had trouble with songs it was Alec they turned to.

Alec attended residential school became one of the best bilingual speakers of his time. This knowledge made him a valuable and important man. Because of this knowledge, Alec became an interpreter between his people and the quickly encroaching white society. Given the general lack of working knowledge of English and the imposition of outside laws, the Tseshaht people often broke laws they knew nothing about, especially since the new laws were quite different from Tseshaht traditional laws. Alec was the one they turned to for help when they were arrested or when they had to appear in court.

In 1910, Edward Sapir, an anthropologist who was collecting data on “Indian” people, arrived in Port Alberni to begin research. Following the example of Franz Boas, the father of American anthropology, Sapir was looking for “informants” who could interview people, write their answers, and mail the data to him. At that time, two people had the ability to do this, Dan Watts and Alec. Dan was a fisherman and so was unavailable. Alec, just out of school, was with his father when Sapir went to do an interview. Being curious, he watched Sapir writing in his dialect and began to copy it. This started a working relationship that lasted over 20 years. For 12 years Alec worked with a committee of elder historians collecting data. In 1933 he made a trip to Chicago to finalize the elder interviews for publication.

Being bilingual in a time of change, a time when the Tseshaht way of life as well as Tseshaht homes were being threatened, meant political involvement. Alec was a huge asset to the Tseshaht people at this time. He was at the forefront speaking for his community, for his people. When the right to fish had been taken away, community members collected money door to door on the reserve so Alec could catch the train to Ottawa. He stayed in Ottawa until he received the guarantee of a drag seine fishery on the Somass River, a fishery we still practice today. Non-native territorial expansion was a primary concern in the early part of the 20th Century. When the construction of the railroad threatened Tseshaht homes along the banks of the river, Alec was there to fight for Tseshaht lands and homes. When the potlatch was criminalized, the Tseshaht were denied the right to practice a ceremony that touched all aspects their lives. At this time, Alec not only documented current potlatches for Sapir but also hosted one. In this way he documented a living, albeit illegal, history.

Alec held Tseshaht songs and history and made Tseshaht history at a time when it was not only difficult but often illegal to hold or practice our traditions. Alec worked hard to maintain what today we call Aboriginal rights and title, the same issues Tseshaht are fighting for today.